Cornerstone VNA, which has been using telehealth since the 1990s, is seeing a promising wave of appreciation for Telehealth among their own staff and patients, who are more receptive to using it. But for many other health care providers the COVID-19 pandemic meant a chaotic transition to telehealth and after more than a year, health care workers and lawmakers are learning more about how effective remote appointments can be. Now, some providers are noting that patients and caregivers will often initiate calls to ask questions and check in if something seems off. Increasing capacity for telehealth may also help with the workforce shortage in the health care industry. The state’s mental health centers have also noticed how telehealth has helped their patients cope during a time of isolation.

Anne Carle’s workday begins with a screen of red, green and yellow boxes. The red ones mean higher risk patients. Carle is a telehealth nurse and RN at Cornerstone VNA in Rochester. She starts to make calls. One of Carle’s patients had recently suffered a stroke. She was recording high blood pressure on her tablet. After seeing that report, Carle reached out on a video call. Though the appointment was only around 8 minutes long, Carle knows what to look for. “She was able to say that she’s able to get up and do her normal activities. So overall […] she was stable,” Carle said. The patient didn’t report any significant pain, she seemed in good spirits, and her facial color looked good, among other mostly positive symptoms.

Other calls are routine, and much more frequent than normal in-person care. For some patients, a daily appointment may be as much about their mental health as physical, Carle says. “It can help them cope, just to see that face… they just feel more comfortable opening up,” she says.

Frank Griffin is one of Carle’s patients. He’s been on the program since February, when he got COVID-19, which made other pre-existing respiratory problems worse. He’s finally recovering, four months later. When Carle called that day for a routine check in, Griffin and his caregiver and daughter Pam, were feeling nostalgic. Griffin will be discharged from the telehealth program soon. The two agreed they were “going to miss the outside social interaction” these appointments bring. In addition to calls with Carle, Griffin also sees a nurse from the VNA in person.

Investing in the Future

Jennifer Gullison, the VNA’s Vice President of Operations, explained that the telehealth program allows the VNA to take on more patients because in-home visits are reduced. In the pandemic, Cornerstone VNA invested in more telehealth units, more than doubling their capacity, from 40 units to 90 units. As the healthcare industry faces a workforce shortage, adding new patients with a n already overworked staff can be tricky. “[The telehealth program] allowed us to flex our staffing to really utilize visits that are absolutely needed, and then to do what we could virtually,” Gullison says. 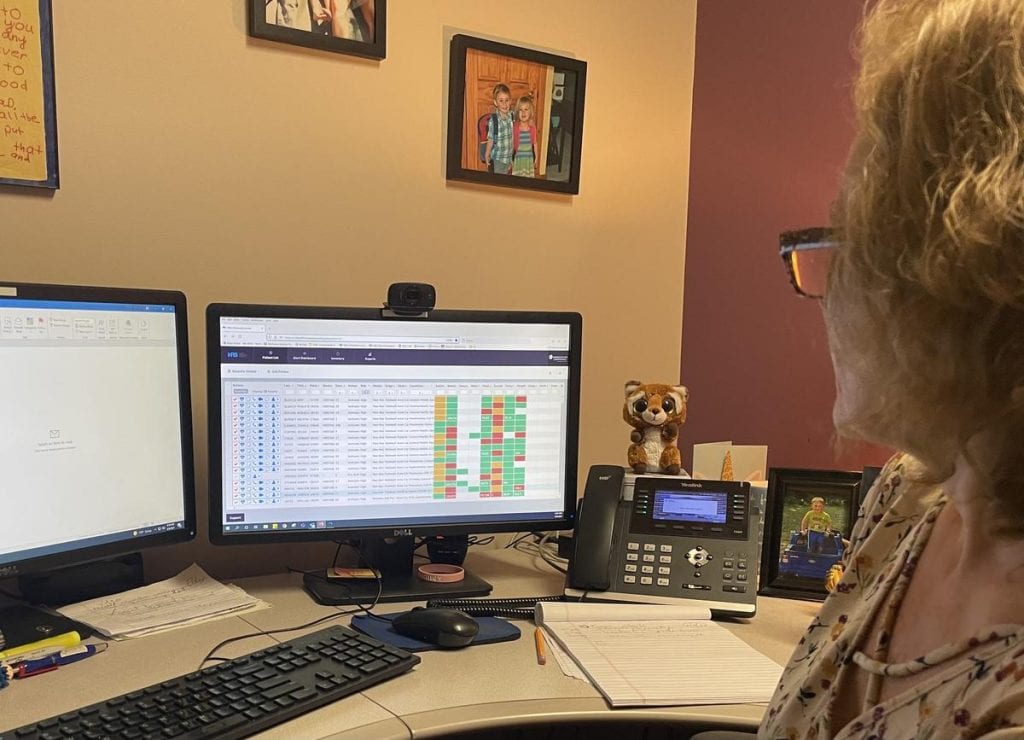 In July 2020 Governor Sununu signed some pandemic emergency telehealth measures into law and created a commission to study it. The law improved reimbursement for telehealth services, making it so Medicaid and commercial health insurers in New Hampshire cover telehealth services at the same rate as those provided in person.

Cornerstone VNA is hopeful that Medicare, which most of their patients use, will follow suit when it comes to Remote Patient Monitoring, the type of telehealth service the VNA provides. For now, the VNA continues to subsidize a large portion of their telehealth costs.